“When you see beauty in desolation it changes something inside you. Desolation tries to colonize you.”

I should probably preface this with a disclaimer: I read the book because I saw the trailer. The movie is coming out in February and features a pretty incredible cast (Natalie Portman, Tessa Thompson, Oscar Isaac, and Jennifer Jason Leigh). I think there’s a possibility that the huge differences between the tone of the trailer and the tone of the book made it a little difficult for me to really get into the book at first. The trailer is colorful where the book is understated, romantic where the book is virtually emotionless, and full of horror-style tension where the book is intentionally monotone. 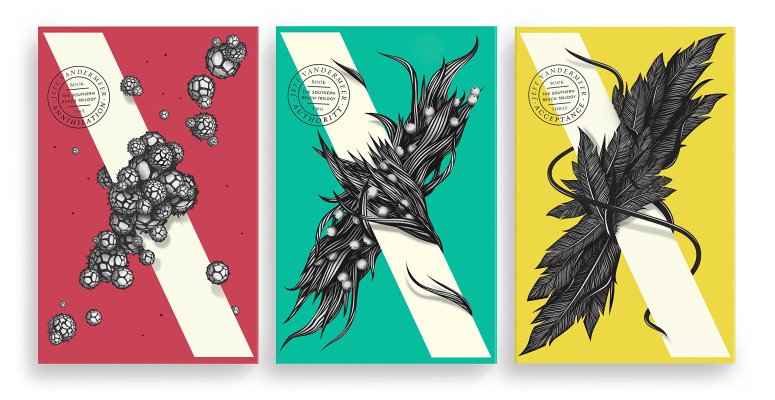 Common consensus is that it’s very well-written… to which I wholeheartedly disagree. I don’t think the clinical style of the biologist’s journal entries lends anything to the story or to the characterization. On the contrary, the writing style makes it almost impossible for the reader to empathize with any of the characters. I learned all too well through House of Leaves just how powerful it is to make stylistic choices that mimic the plot points themselves, so I think the writing style in Annihilation could have worked beautifully if done properly, considering the biologist herself struggles to connect with people and form attachment. However, I really do feel that this book could have benefited with a slightly more human tone. I think a good comparison would be to Cormac McCarthy’s The Road. Talk about your minimalistic writing styles! But in that novel, the bare bones approach works to build the eeriness of the setting, the grittiness of the process, and the despair of The Man. In Annihilation, the sparseness only serves to make me feel detached. The writing is beautiful in some places (e.g. all of the lines of “scripture” on the walls and some of the more tender descriptions of nature) but truly bland in others. There are lines that give me chills, but that effect is primarily due to the fact that they are moments that stand out from the otherwise monotonous narration, not because they are particularly gripping or beautifully written. I saw another review that mentioned reading between the lines to pick up on certain things, but again, I feel like even that was poorly done. Some of the strongest in-between-the-lines writing I’ve come across in recent memory is that of George R.R. Martin when he’s discussing specific things, namely relationships and torture. His characters make hyper-subtle asides regarding Renly Baratheon’s sexuality, and the only way we can even begin to know the extent of what happened to Theon is by picking up on what he doesn’t say. But when it comes to monsters and paranoia, I think it takes an extremely skilled writer to make the less-is-more approach work in their favor. All in all, I was overwhelmingly disappointed with VanderMeer’s writing style, despite the brilliance of his concept. I think the strong point of the writing is that it kept the book short, which allows for it to be read in one sitting and consequently, allows what tension there is to build.

The knowledge that this is a trilogy gives me an ounce of patience regarding the frustrating lack of resolution and reveals. I think I might have truly enjoyed this if there had been a real climax– or even a more clear-cut climax instead of one that made me re-read the scene three times. I’ve been told that the next book features different characters, which makes me more inclined to pick it up. But what I really want is answers. I want to know about the border door and the creatures that came to the lighthouse and the assimilation of Area X and what the deal is with the writing on the wall.

What worked for me: I was really pleased with how deftly VanderMeer wrote the full cast of females. His characterization of these women is the exact opposite of what bothers me in books like The Circle. Each character is unique, has her own set of strengths and weaknesses, and is perfectly capable of doing her respective job. There isn’t any jealousy or petty bickering– all the arguments revolve around the entirely plausible stress of Area X and how to proceed. I was also really pleased by the inclusion of an unreliable narrator, which I tend to adore (a la Catcher in the Rye and The Girl on the Train). Our entire touchstone to the world and the other characters is through the eyes of the biologist. This makes it increasingly difficult to know how much is accurate and how much is just her own personal bias speaking. Is the world actually changing and dangerous or is the biologist’s mind playing tricks on her?

My overall takeaway is that there is too much emphasis on presenting the mysteries without any emphasis on solving them. We are presented with the feelings of being observed by their surroundings, the anomaly of this ecological wonderland, the strange hybrid creatures everywhere (not to mention the ones climbing the lighthouse) and the frustratingly vague “brightness” within the biologist. But when it comes down to it, the best explanation we get is that Area X is a thorn thrust into the side of the earth. Literally, that’s the explanation.

“Think of it as a thorn, perhaps, a long, thick thorn so large it is buried deep in the side of the world. Injecting itself into the world. Emanating from this giant thorn is an endless, perhaps automatic, need to assimilate and to mimic.”

This may sound like I hated the book, but I didn’t. Was I disappointed by the stylistic choices? Yes, very much so. However, I do think it’s an intriguing storyline with some plot points that really caught my fancy (e.g. all those hidden journals, like holy jeebus). Based on the trailer, I think it’s safe to say that the movie is going to deviate massively from the book, and to be honest, I don’t think that’s a bad thing.