Prompted by: The Fate of the Tearling by Erika Johansen

Deus ex machina. Latin for “God from the machine” and often loosely translated to “the god in the machine.” Originally, this expression was a reference to an actual machine used in the performance of Greek plays. A physical device would be used to bring the actors playing gods onto the stage. Sometimes this was a crane that would lower the gods from above, or sometimes a riser that boosted them up from a trapdoor in the stage. The concept of introducing gods into the story was often used to resolve conflict or conclude a plot point. 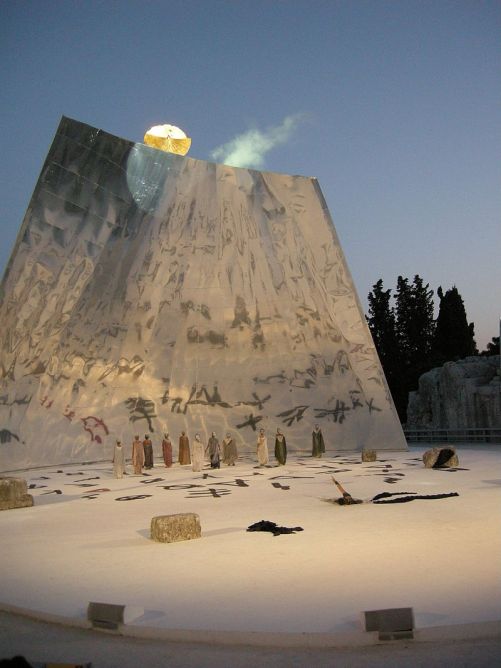 Today, the term is used to reference a plot device where a seemingly unsolvable problem is suddenly and abruptly resolved by the unexpected intervention of a new character/object/ability/event/etc. The key here is that regardless of what this new thing may be, by its very definition, it shouldn’t have been previously queued up or alluded to. This means that a true deus ex machina will likely leave the reader saying “What! Seriously?!” after its appearance, because there really wasn’t any way for them to have seen it coming. While utilizing this plot device isn’t always lazy, it does seem to be most often utilized by lazy writers.

Popular debates over possible deus ex machinas include: the elder wand/wand lore/wand ownership in Rowling’s Deathly Hallows, the eagles in Tolkien’s The Lord of the Rings, and Thoros of Myr repeatedly bringing people back to life in Martin’s Song of Ice and Fire series.

The book that got me pondering this plot device is the third and final book in Erika Johansen’s Tearling trilogy. As a little recap: I devoured the first book in the series, The Queen of the Tearling. It featured some of my favorite elements in a story: a strong female lead (who doesn’t display any of my major pet peeves), no overt or unnecessary romance, well-written political intrigue, and inventive and original world-building. The second book, The Invasion of the Tearling, wasn’t quite as solid but was still thoroughly enjoyable. Johansen included a lot of flashbacks through the eyes of a new character, which made it a little more difficult to stay grounded in the main storyline. However, it’s easily forgivable because the character featured in the flashbacks is dynamic and brave as well. Then comes the third book, The Fate of the Tearling. While the first half of the book isn’t flat-out disappointing, it is clear from the start that it is nowhere near as strong as the previous books were. Sadly, Johansen seemed to have painted herself into a corner and created the biggest cop-out of an ending that I have ever read.

Our heroine uses time travel via her sapphire to alter the timeline and create a happy ending in which no one except herself remembers what happens. All of the characters we spent two and a half books connecting with are suddenly obliterated and their storylines are erased. The battle royale that the entire trilogy was building to is eliminated in the blink of an eye. There is no showdown, no reveal, no resolution. Just a tired trope.

The argument that some fans have made is that because the sapphires were present all along, it’s fine that they demonstrated these excessive powers and magically resolved everything. People have also said that Kelsea was a selfless queen who was willing to do anything to protect her people, even if it meant suffering alone for the rest of her life. While those are both fair assertions and might eliminate the possibility of the sapphires being a deus ex machina, neither of them change the fact that it was a lazy choice. Proper story outlining and planning would have eliminated the need for such a drastic and uncharacteristic move.

I think my issue with plot devices like this is that they just end up feeling like a betrayal of the characters that we’ve grown attached to. I discussed lazy betrayals in a previous post, and I think it’s a similar situation here. It seems safe to say that most readers want their favorite characters to make choices and moves that are on par with what we already know about them. We want our writers to do them justice because that’s what keeps us immersed in the story. And immersion is the mark of a truly good story.