Prompted by: The Secret History & The Raven Boys

I’m sure most of us are familiar with manic pixie dream girls by now, but just in case, here’s a quick overview: Coined by critic Nathan Rabin in reference to Kristen Dunst’s character in Elizabethtown, the Manic Pixie Dream Girl “exists solely in the fevered imaginations of sensitive writer-directors to teach broodingly soulful young men to embrace life and its infinite mysteries and adventures.” She is unavoidably quirky, overtly charming (often because of her quirkiness, sometimes through her aloofness), and is, 99 times out of 100, the love interest of the male protagonist.

“A type of female character depicted as vivacious and appealingly quirky, whose main purpose within the narrative is to inspire a greater appreciation for life in a male protagonist.”

If you’re struggling to think of an example, you can pretty much insert Zooey Deschanel’s on-screen essence in just about anything she’s ever been in. The problem that this trope creates is twofold: it typecasts certain actors, and more importantly, it reduces female roles down to one-dimensional objects of infatuation.

“When you get sent scripts and you see you’re always playing someone’s girlfriend when you want to be the central role, it’s so depressing.” 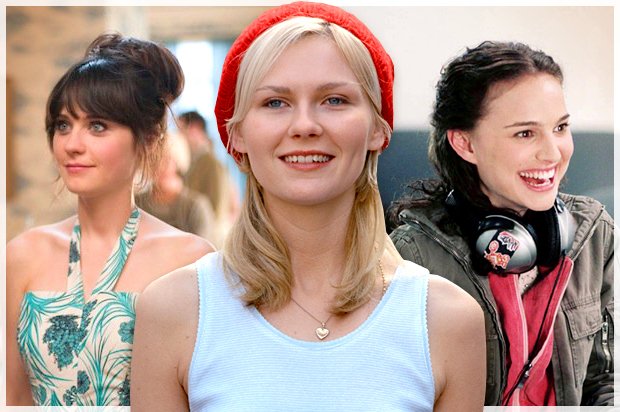 The holy trifecta of MPDGs in film is Claire in Elizabethtown, Summer in 500 Days of Summer, and Sam in Garden State. However, the presence of the manic pixie dream girl has thoroughly infiltrated the lit world. In fact, they’ve been around for much longer than the term has been. From Sam in Perks of Being a Wallflower to Camilla in The Secret History, these manically dreamy girls pop up like daises (coincidentally, that’s a pretty popular name for the MPDG) in novels both old and new. Usually, the MPDG takes a backseat to our main (male) character. In The Secret History, this means she talks significantly less than any of the other (male) characters. In Looking for Alaska, this means she crashes her car and dies– which propels the main (male) character into his self-realization phase. Her personality is filtered through the rose-colored glasses of our male protag, and she usually ends up vanishing sometime before the third act so our brave boy can ~discover himself~. If you haven’t ever come across an MPDG in literature, you can pick up virtually any novel by Haruki Murakami or John Green to find one.

Here’s the thing about manic pixie dream girls: they really can seem quite delightful. They’re undeniably enjoyable to read, at least when they’re first introduced, because it takes a certain amount of whimsy and creativity to write them. They have unique names and quirky personality traits and most of the time they have dyed hair and green eyes. They’re vibrant and electric and people gravitate towards them. So why are they problematic? As I mentioned earlier, the big issue is that it reduces a unique female character to nothing more than a trope, which is problematic all on its own. But one of the reasons this is so frustrating is because it’s such an easy fix.

Maggie Stiefvater is the author of The Raven Cycle, a four-book series following the adventure of four prep school boys and their one female friend, Blue. Sounds like trouble already, doesn’t it? Yeah, that’s what I thought too. Except it’s not. Stiefvater is, beyond a shadow of a doubt, an incredibly talented writer. She makes paragraphs feel like listening to your favorite song on the radio while you’re cruising at night with the windows down. She weaves stories that drip in nostalgia and make your heart ache with the beauty of it all. And the vehicle that carries all of that emotion is her characterization. Every single character is resplendently unique and unavoidably important. Every single one has a part to play within their own character arc as well as in the grand scheme of things. But if it weren’t for that, all of them could easily feel like manic pixie dream girls (and boys). Blue only eats yogurt and wears crochet leggings in the summer. Gansey chews mint leaves and bought a warehouse to convert into a living space. Ronan is a high schooler with elaborate tattoos and a secret love for farming. Adam has freckles and a shy voice and can fix just about anything wrong with a car. There’s a family of psychics living under one roof, a handsome hitman with a penchant for 70’s culture, a Bulgarian who makes Molotov cocktails and loves street racing, and a 7 foot tall giant who lives in a house full of cats. Each character is quirky in one way or another, and could easily be one-dimensional without flaws or struggles or arcs. But Stiefvater makes sure that isn’t the case. She makes sure they all function both as cohesive groups and as individual characters. They work within their romantic storylines and outside of them as well. They are brave and scared and lonely and hopeful. They have secrets and share their lives with each other and throw temper tantrums from time to time. They are whole characters with whole personalities and it’s impossible not to adore them. (artist credit here)

(If you haven’t read anything by Maggie Stiefvater yet, you’re missing out. She’s a master of magic and beautiful prose and slow burn relationships.)

My creative writing professor in college told us that all characters should be like the yin-yang symbol: the darkest characters should still have a spot of light, and the brightest characters should still have a spot of dark. No one wants to read about a glossed-over girl who doesn’t have anything wrong with her, just like no one wants to read about the dark villain with the mustache and black hat. To relate to a character, the reader must be able to see them as human. Not as just an object to be obtained, not as a quirky caricature, not as a disposable plot point. And so therein lies my issue with manic pixie dream girls: they are quirky objects, hard to obtain but easy to dispose of.

While the MPDG trope is a device that is in desperate need of some work, I’d be remiss to not share a secret about it. Sometimes, if I’m having a bad day, I think about how John Green would write me as a manic pixie dream girl. It’s reassuring to know that my collection of vintage china and my color-coded bookshelf would be whimsical, that my compulsion for neatness and my ripped cuticles would be marks of my quirkiness. That my gray-green eyes framed by glasses and my literary tattoos would be attractive. So if nothing else, the trope sometimes helps me to reframe myself and remember that there are always parts of ourselves that are delightful.